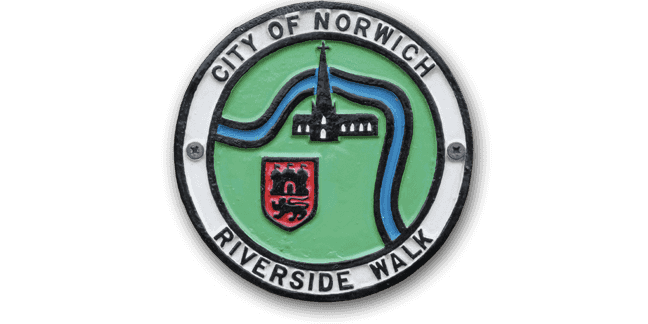 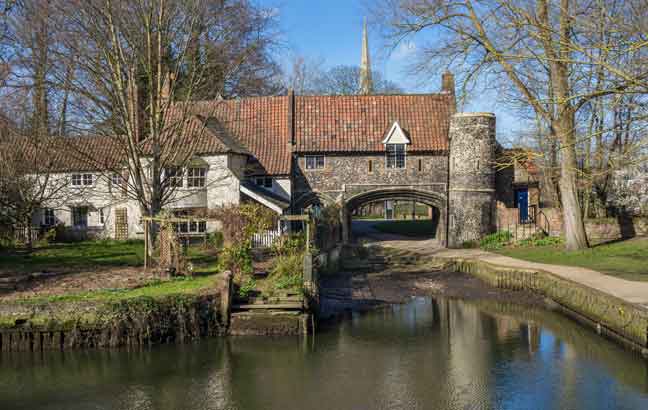 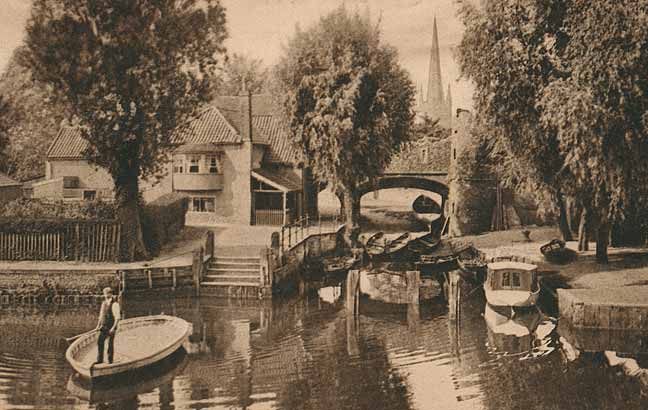 The Riverside Walk is approximately two miles long and follows the course of the river Wensum for its entire length. The footpath enters Norwich from the north west and runs eastward across the north side of the city centre before turning south and ending at Thorpe railway station.

The section from Whitefriars Bridge to the railway station passes by the historic Cow Tower, Bishop Bridge and Pull's Ferry, and is especially lovely in the spring, when the areas to the sides of the path are carpeted with daffodils.

The photograph, above, was taken close to Pull's Ferry and looks towards the Cathedral across the playing fields of Norwich School.

When construction of the cathedral and friary commenced in 1097 a canal was cut from the river, along the line of what is now the Lower Close, to the building site. Building materials, much of it stone from Caen in Normandy and timber from the Baltic, were brought by barge from the North Sea through Yarmouth and up the rivers Yare and Wensum to be delivered, via the canal, directly to the site. A flint faced, arched watergate, still standing, was added in the fifteenth century and the canal continued to be used as a means of delivering peat for heating and provisions to the friars until the dissolution of the monasteries in the reign of Henry VIII. The adjoining house, at one time an inn but now a private residence, was built in the sixteenth century. The canal, shown here in an engraving of c.1780, was filled in during the late eighteenth century.

Today the watergate and house, known collectively as Pull's Ferry, present one of the most iconic views of Norwich. The name is derived from the ferry which crossed the river at this point and from John Pull, who was the ferrymaster from 1796 until his death in 1841 and was licensee of the inn. The ferry was popular after the First World War as a shortcut across the river on match days for the supporters of Norwich City Football Club – The Canaries – on their way to the club's ground – The Nest – which was located in a disused quarry off Rosary Road, only a short walk from the river. The club moved to a new ground at its present location in Carrow Road in 1935 and the ferry ceased operation in 1943.

A very pleasant way of reaching the city centre when arriving in Norwich by train is to take the Riverside Walk from the train station to Pull's Ferry, and to then turn left to walk through the quiet and tranquillity of the Close to Tombland, leaving by either the Ethelbert or Erpingham gates, which date from the fourteenth and fifteenth centuries respectively, and from where the city centre is only a short walk away.

Above right: Pull's Ferry from across the river.

Below right: Pull's Ferry, c.1918, showing the ferry. From a postcard of the period.