Cow Tower is a medieval artillery tower situated at a sharp bend in the River Wensum and alongside the Riverside Walk. It was built in c.1398–9 to defend the approaches to Norwich at a point overlooked by the high ground across the river at the western end of Mousehold Heath.

The tower stands some 48 feet (14.6 metres) high and 36 feet (11 metres) in diameter. Its walls are six feet (1.8 metres) thick at the base and consist of a central core of stone and flint, faced externally and internally with red brick. They are punctuated at intervals by arrow slits and gunports, and these would have been ready for use by archers with crossbows and by soldiers armed with early forms of gunpowder artillery.

The building probably takes it name from the Anglo-Saxon Cowholme, the water-meadow on which it was built, and it would have housed a team of artillerymen within its three storeys, with sleeping quarters on the upper floors and a communal area below.

Cow Tower is now an English Heritage site managed by Norwich City Council. The interior of the tower is not accessible but may be viewed through a grill across the entrance, from which the thickness of the walls is clearly visible. 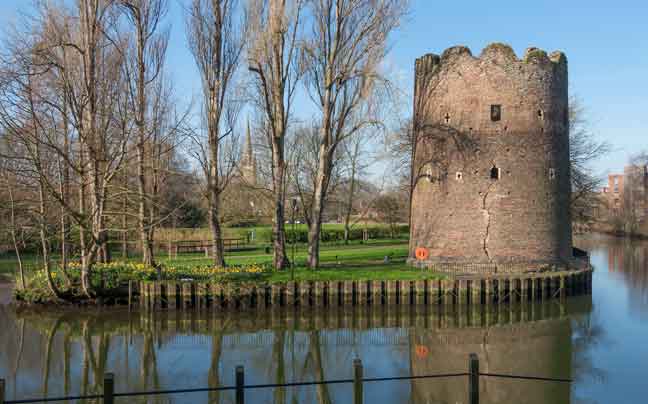 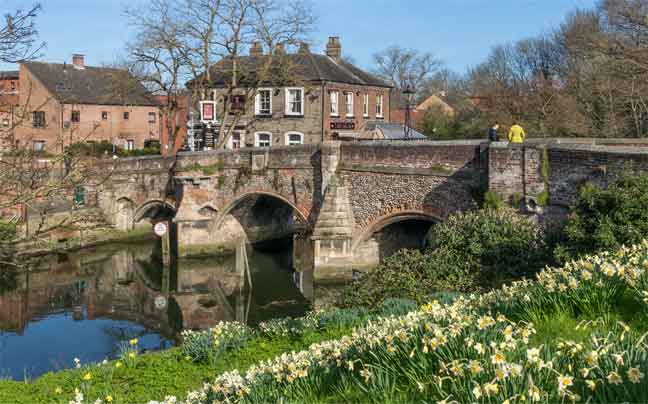 Just a short distance from Cow Tower the Riverside Walk crosses Bishopgate adjacent to Bishop Bridge. There has been a river crossing at this point since Roman times, when a road which ran east to west crossed the river here, possibly by means of a ford rather than a bridge, before taking a route which probably ran along the line of the present cathedral nave and what is now Tombland Alley. The present bridge was built c.1340 and is the oldest surviving medieval bridge in Norwich. Originally it had a fortified gatehouse which, together with Cow Tower, formed part of the defences on this, the eastern side of the city. Bishopgate, as its name implies, led to the Bishop's Palace, and the monks from the cathedral priory were entitled to charge tolls to travellers wishing to cross the bridge.

In the two centuries prior to the English Reformation, and again during the reign of Mary Tudor (‘Bloody’ Mary), those deemed guilty of religious heresy would be brought here on foot and led across Bishop Bridge to be burned at the stake in a disused chalk pit, which came to be known as Lollards’ Pit *, just across the river.

The gatehouse, shown here in an engraving of c.1780, was demolished in 1791 and today the only evidence of its existence are two semicircular projections, the remains of turrets, one on each side of the bridge at its western end. The bridge ceased to be used for vehicular traffic in 1995, but remains open to pedestrians and cyclists. Alongside the bridge is the Red Lion public house. The present building dates back to the 18th century, but it is claimed that there has been a pub on the site since the building of the bridge or even earlier.

To the west of Bishop Bridge and nestled between Bishopgate and the Riverside Walk are the grounds of the Great Hospital, now a highly regarded sheltered housing and care village, the origins of which date back to 1249 when it was founded to care for aged priests, poor scholars and sick and hungry paupers.

* Lollard: Originally a derogatory term applied to followers of the 14th century philosopher and theologian John Wycliffe, the first to translate the Bible into English and who preached against what he considered to be the self-serving Roman Catholic establishment of papacy and clerics. The term later became a synonym for any religious heretic.