In its splendidly imposing position overlooking the market place and Gentleman's Walk, the church of St Peter Mancroft is the largest of the medieval parish churches in Norwich and one of the finest in England.

A church has stood here since the Normans built their cathedral and castle soon after the Conquest and moved the market from its original Anglo-Saxon site at Tombland to its current location. The present church dates from 1430 and was completed in a single phase of construction over the next twenty-five years. Consecrated in 1455, the building presents a particularly fine example of mid-fifteenth century Perpendicular style architecture and has remained unaltered by subsequent building.

The sheer size of St Peter Mancroft and the richness of its fabric are due in large part to the generosity of the citizens and merchants of Norwich, keen to display their prosperity at a time when the city was the second wealthiest in England after London. The exterior is faced almost entirely in limestone, brought to Norfolk at great expense from far afield and combined with costly knapped flintwork. The large tower, buttressed on all sides, may have been designed to be topped by a lantern tower, but this was never added. The present spire dates from 1895.

The interior of the church is 180 feet in length and 60 feet in height. The nave has a fine hammer-beamed roof, complete with angels, below which is a continuous clerestory of seventeen closely spaced windows on each side. These, together with there being no structural division between nave and chancel, give the interior its sense of space and light.

The east window contains fine examples of fifteenth century stained glass depicting scenes from the bible, and originally the other windows in the church would have been filled with similar glass. In 1648, however, rioting between Parliamentarians and Royalists in the English Civil War led to the gunpowder store in nearby Bethel Street exploding, resulting in many deaths. All the windows of the church were blown in, and it was not until four years later that all the remains of the glass had been gathered and assembled to form the present east window.

Immediately below the window is a spectacular reredos, designed by architect John Pollard Seddon in 1895 and gilded by Sir John Ninian Comper in 1930. Comper also added the figures of Christ in glory and the four saints who brought Christianity to Norfolk, shown in detail elsewhere on this page.

St Peter Mancroft has a long history of bell ringing going back over three hundred years. Of the present peal of fourteen bells, eleven date from 1775 and the most recent is from 1997. They are rung regularly by the St Peter Mancroft Guild of Ringers. 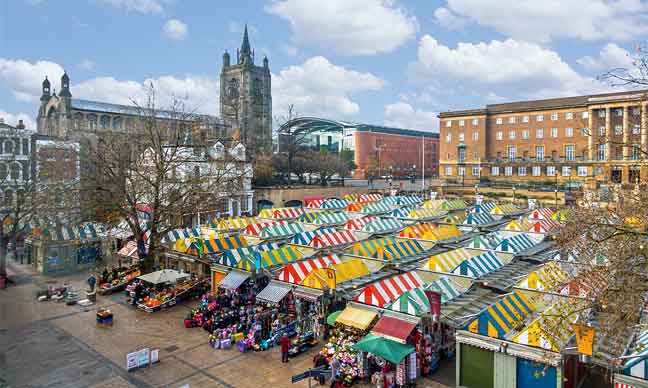 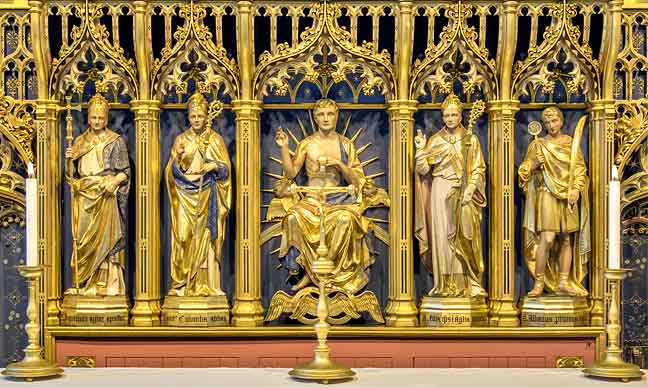