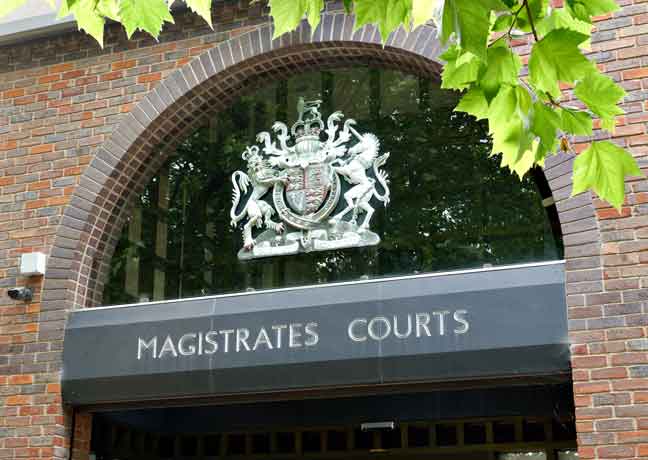 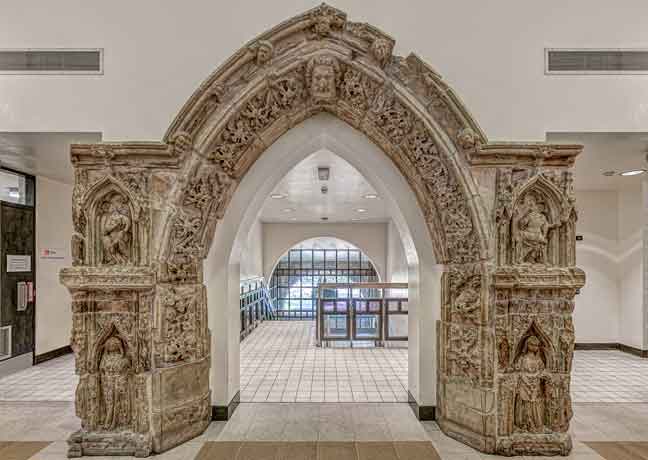 In 1981, just prior to the building of the new Magistrates and Crown Courts complex between Bishopgate and the River Wensum, an extensive archaeological dig uncovered the remains of a stone house dating back to the twelfth century. The ruins, immediately adjacent to the river and with walls still present to a height in excess of two metres, were the remains of the undercroft, or cellar, of what was once a substantial house probably built for a wealthy Norman family.

When the courts complex was subsequently built the ruins were incorporated into a basement specially constructed beneath the Magistrates Courts. Access is by a spiral staircase, the entrance to which is normally kept closed to create a sealed chamber in which the climate is carefully maintained at the optimal levels to best preserve the ruins.

An interesting feature of the remains is a latrine turret adjoining the house on the side facing the river. At the base of the turret a semicircular arch, still present, would have been open to the river, which is still tidal at this point, and would have allowed water to enter and leave the turret, thus flushing the toilet twice daily.

Also in the Magistrates Courts building is the Arminghall Arch, an elaborately carved fourteenth century stone archway which was originally part of the Carmelite Friary, a short distance across the river from where the court buildings now stand. Following the dissolution of the monasteries the arch was removed and subsequently re-erected as the entrance to Arminghall Old Hall, a timber-framed, moated mansion of about 1600, some three miles south of Norwich.

By the early twentieth century the Old Hall had fallen into disrepair and was demolished. Much of the building material, including the arch, was recovered and removed to Crown Point Hall, a property a mile or so away and in the ownership of the Colman family of Colman's Mustard fame. There the arch was installed in a vinery, which was itself demolished in the 1970s.

In 1979 the arch was acquired by Norwich Museum with the aid of grants from Norwich City Council and the Victoria and Albert Museum. A few years later, and after a round trip of some 450 years, it was incorporated into the fabric of the new courts building, finally returning to a new home just a stone's throw from its original location.

Public access to the courts complex is limited. The Arminghall Arch is on display on the public concourse of the Magistrates Courts building and may be viewed at any time during office hours, Monday to Friday. The Norman House is normally open to the public only during the Heritage Open Days usually held each year in early September.

The entrance to the Magistrates Courts. 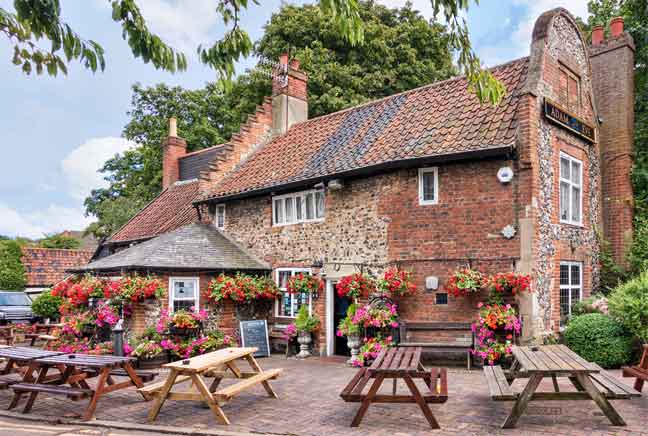 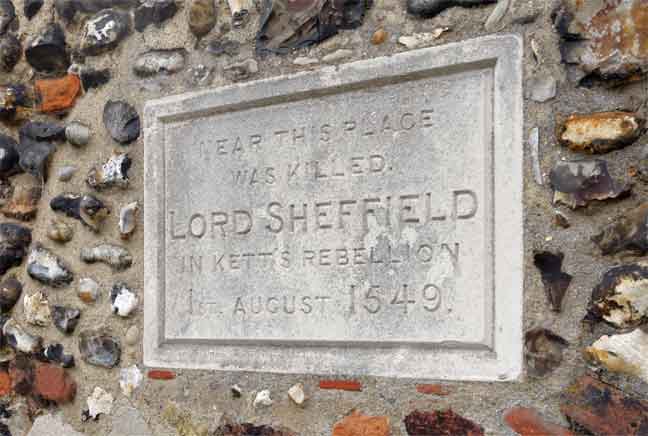 The Adam and Eve

Just a few steps along Bishopgate from the courts complex is the Adam and Eve, said to be the oldest public house in Norwich. Although much altered over the years, and probably with none of its present fabric dating back to earlier than the seventeenth century, records from as early as 1249 indicate that the building was originally a monastic brewhouse offering hospitality to the workmen engaged in the construction of Norwich Cathedral.

It was to the Adam and Eve that Edmund, Lord Sheffield was carried after being mortally wounded during Kett's Rebellion in the summer of 1549. The rebellion was a revolt against the enclosure of common land by wealthy landowners and yeoman farmers, which left peasants with nowhere to graze their animals. One farmer, a Robert Kett of Wymondham, was sympathetic to the rebels' cause and offered his support. Lead by Kett and his brother William, the rebels marched to Norwich, gathering recruits from nearby villages along the way, and by mid-July a force of some 16,000 men had set up camp on Mousehold Heath, a mile or so to the north-east of the city.

A Royal army of some 1500 men, including Lord Sheffield, was dispatched to Norwich to quell the rebellion. However, on 29 July the rebels stormed into the city and took it by force. On the 1 August skirmishes broke out between the rebels and a team of cavalry led by Lord Sheffield. The story goes that Sheffield fell from his horse in Bishopgate and, recognising that he would be either killed or captured, removed his helmet as a signal that he was prepared to surrender. A rebel, who by occupation was a butcher, failed to recognise this gesture and killed Sheffield with a blow to the head with a meat cleaver.

The rebellion was finally ended in a battle to the east of the city in late August. The Kett brothers were captured and taken to the Tower of London to await trial for treason. Both were found guilty and brought back to Norfolk to be hanged, Robert at Norwich Castle and William at Wymondham Abbey.

Today, the Adam and Eve, with its outside tables and its colourful, award-winning floral displays in the summer months, is a particularly popular venue, serving fine ales and light meals to tourists and locals alike.