The Mustard Shop and Museum

PLEASE NOTE THAT THE COLMAN'S MUSTARD SHOP AND MUSEUM IS NO LONGER OPEN.
We have retained this entry for archival purposes only.

Commemorating over 200 years of mustard production in Norfolk, the Colman's Mustard Shop and Museum is situated in the Royal Arcade, just a few steps from Gentleman's Walk and the market place.

It was in 1814 that Jeremiah Colman started his mustard and flour business at the water mill at Stoke Holy Cross, some four miles south of Norwich. In 1823 he was joined in business by his adopted nephew, James, and the firm of J & J Colman was established.

In 1854 James' son, Jeremiah James took over the running of the business at the age of 24. In the space of less than fifty years he transformed it from a small company selling mustard locally to a brand recognised all over the world. In 1856 he moved production to purpose built premises at Carrow, on land bought from the Norfolk Railway Company and well served by road, rail and river transport. Initially the new factory had about 200 employees, but this number increased rapidly as the business and the factory expanded. In 1866 Jeremiah James was appointed mustard maker to Queen Victoria. By the time of his death in 1898 the company had close to 2000 workers and was a major employer in the area.

Jeremiah James Colman was a charitable man and treated his workers with great humanity, providing them with employment benefits at a time when many other industrialists were claiming that to so do would be the downfall of their businesses. He set up a school for his workers' children and later a nursery for those of a younger age. Educational classes on various subjects, including dressmaking, were offered for the adults. A kitchen provided workers with morning tea or coffee and a hot lunch, charged at cost, and a dispensary, complete with doctor and nurse, attended to their medical needs.

The Mustard Shop was originally located in Bridewell Alley and was opened in 1973 to commemorate the 150th anniversary of the founding of J & J Colman. It moved to its present location in 1999.

The Colman's advertisement is reproduced with kind permission of Unilever from an original in Unilever Archives. 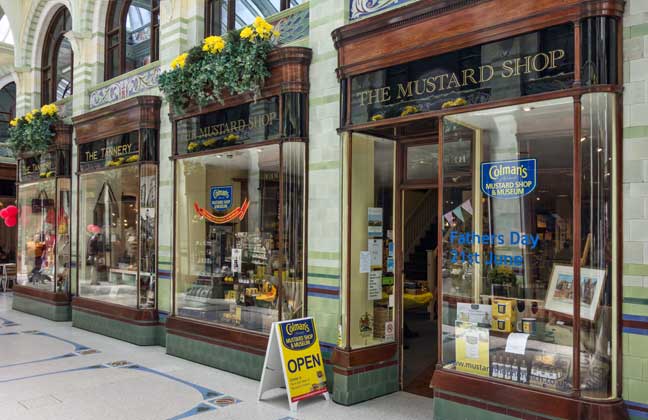 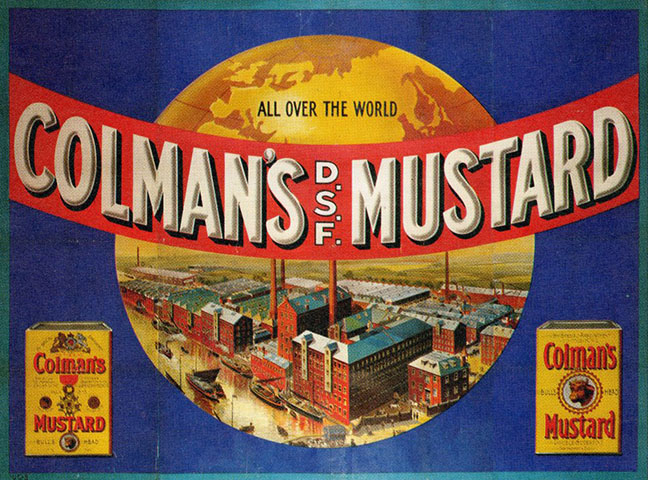