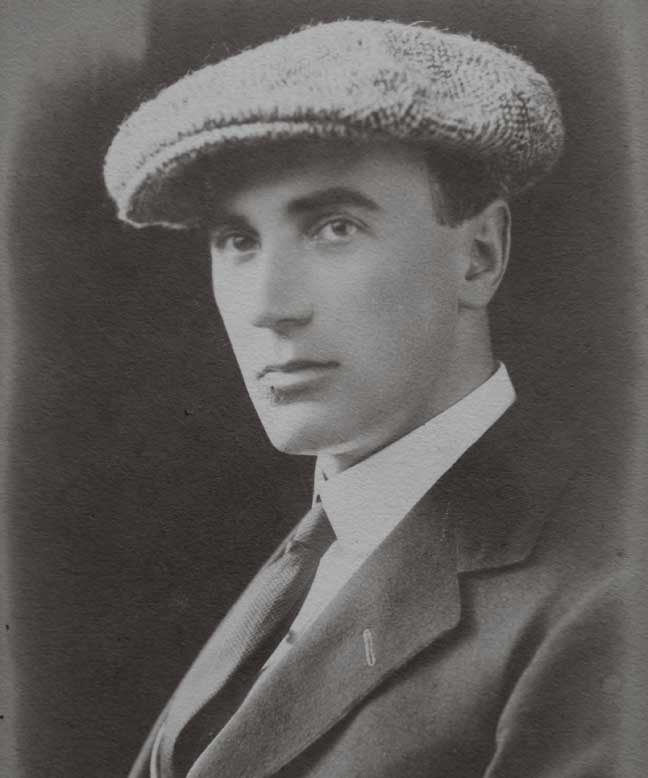 Nugent Monck, from a portrait dated 1911, the year in which he founded the Guild of Norwich Players. 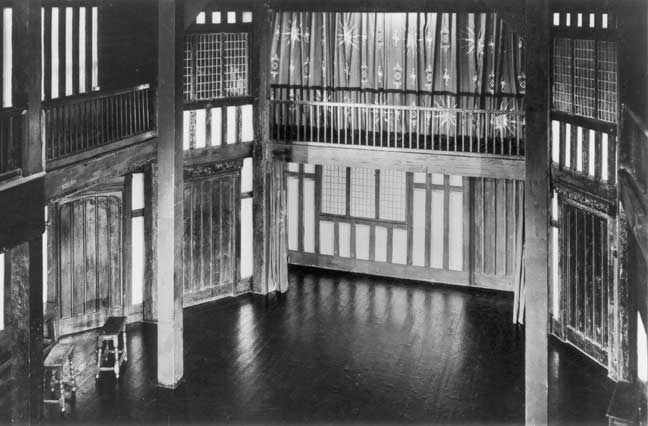 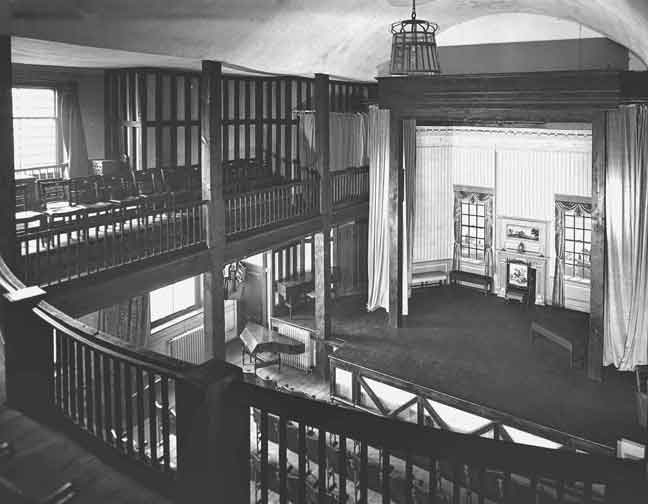 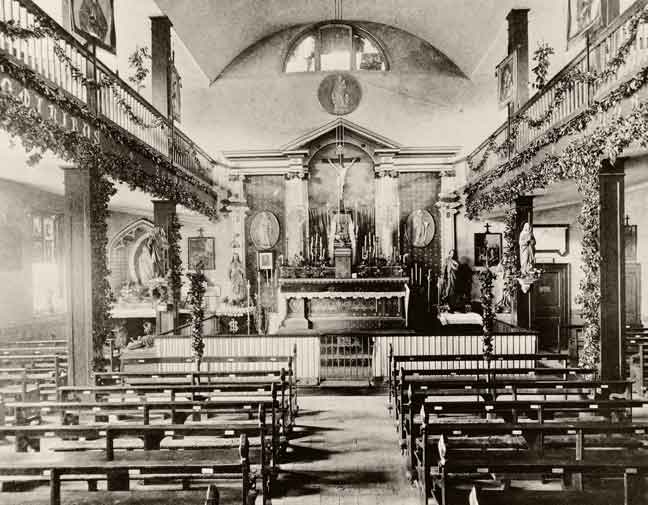 The Maddermarket Theatre, located in St John's Alley in central Norwich and housed in a former chapel, opened its doors to the public in 1921 as the permanent home of the Guild of Norwich Players, a company of amateur actors brought together by theatre director Nugent Monck.

Walter Nugent Monck, C.B.E. (1878-1958) was the son of a Shropshire clergyman. After attending school in Liverpool, to where his father had been posted, he enrolled in the Royal Academy of Music at the age of fifteen. Although musically talented, he found himself drawn more towards the theatre, and transferred to a drama course at the Academy. While touring some years later he met William Poel, the English actor and theatre producer, and became the stage manager of Poel's Elizabethan Stage Society, which presented plays from the Elizabethan and Jacobean periods on an open platform stage with little or no scenery and quick scene changes, as they would have been performed in William Shakespeare's time.

In 1908 Monck was invited to Norwich by the Precentor of Norwich Cathedral, who had briefly studied music with Monck at the Academy, to produce a series of historical tableaux to be presented in the following January at the city's St Andrew's Hall. He returned to Norwich in the summer of 1909 to produce The Masque of Anne Boleyn, a pageant performed at Blickling Hall in that August (and again in 1925 and 1938). He came back again during the summer of 1910 to direct an amateur production of the W. B. Yeats play, The Countess Cathleen, performed by the Old Girls Association of the Norwich High School. Yeats attended one of the performances and invited Monck to spend the autumn and winter working at the Abbey Theatre in Dublin while the principal company were away touring in America.

Monck had found that he liked Norwich, and he had already been offered, and had accepted, the rental of a recently renovated Tudor house in Ninham's Court, off Bethel Street, and in the spring of 1911, after his time in Dublin, he returned to Norwich to make the city his home. In that same year he founded the Guild of Norwich Players, at first a group of just eight amateur actors. Initially they performed in the drawing room of the house in Ninham's Court, which at a tight squeeze could accommodate an audience of about 70 persons.

As word of their performances spread it soon became clear that a larger venue was required, and Monck negotiated with the Crown Brewery to lease the Music House (now part of Wensum Lodge) in King Street, with a capacity closer to one hundred. The Players disbanded for the duration of the First World War, during which Monck served in the Royal Army Medical Corps, but came together again in 1919, continuing to perform at the Music House.

Their popularity was again such that by 1921 a further search for larger premises was needed. One of the buildings under consideration was a disused Roman Catholic chapel tucked away off St John's Alley. Dedicated to St John the Baptist and built in 1794, the chapel had become redundant around the time of the opening of the much larger Catholic church on Earlham Road. Subsequently it had been put to various uses, but by 1921 it had become forlorn and neglected. Monck, on a visit with members of his company, had almost discounted it as a contender until he spoke to his companions and heard his voice ringing out loud and clear. The acoustics were excellent, due to the shape of the barrel ceiling, similar to that in the Sistine Chapel on which it was based. A further advantage was that the building already had a gallery on three sides, and he realised this would considerably simplify its conversion to an Elizabethan style playhouse. Monck purchased the building and, after a short period of planning, the conversion took just six weeks. Monck would have preferred his theatre to have a ‘thrust’ stage, i.e. one extending into the audience, but space and available funds would not permit this. The announcement advertising the opening of the new theatre stated –

‘The Maddermarket Theatre, Norwich, is the first building in England, since the Commonwealth, definitely constructed with an “Apron” stage and gallery, so that Shakespeare can be given upon the stage for which he wrote. ’

The 220-seat theatre opened in September 1921 with a performance of Shakespeare's As You Like It. In the ensuing years the theatre flourished, performing not only Shakespeare and the works of other Renaissance playwrights but also plays from more recent times. By 1933 the Maddermarket had become the first theatre in the world to have performed all 37 of Shakespeare's plays under the same producer. In 1940 George Bernard Shaw wrote to Monck, telling him –

‘There is nothing in British theatrical history more extraordinary than your creation of the Maddermarket Theatre out of nothing, with no money and no municipal support ...’

Nugent Monck retired in 1952, but continued to play an occasional part in the running of the theatre. He was awarded a CBE in the Queen's Birthday Honours of 1958, and he died in the October of that year. His ashes were laid to rest only a short distance from the theatre in the church of St John Maddermarket, where a memorial plaque commemorates his remarkable life and legacy.

In 1948 Monck had purchased derelict buildings immediately to the south of the theatre with a view to extending the auditorium. This was completed in 1953, increasing the seating capacity to around three hundred. In 1990 the stage was extended forward into the auditorium by seven and a half feet, finally giving the theatre the thrust stage which Monck had wanted. By careful realignment of the gangways and seating this was achieved with the loss of only ten seats.

Today the theatre is thriving, and offers a greater choice of entertainment than ever before, with twelve in-house plays each year interspersed with visiting companies and artists providing an eclectic mix of drama, classical and contemporary music, dance, and even stand-up comedy. The Maddermarket is also home to the Mad Red Theatre School, which offers drama classes and workshops to people of ages ranging from six years to adulthood.

Nugent Monck, from a portrait dated 1911, the year in which he founded the Norwich Players

* These two images, which clearly show the barrel ceiling which gives the theatre its excellent acoustics, appear by courtesy of Norfolk County Council Library and Information Service  – www.picture.norfolk.gov.uk

Above: An early photograph of the Maddermarket's Elizabethan-style stage

Left: Nugent Monck, from a portrait dated 1911, the year in which he founded the Norwich Players 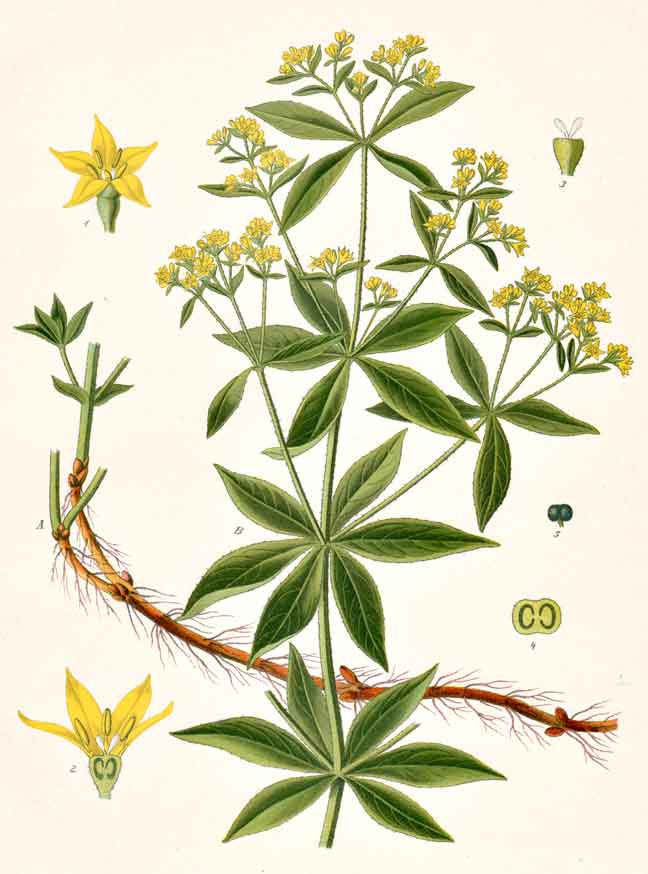 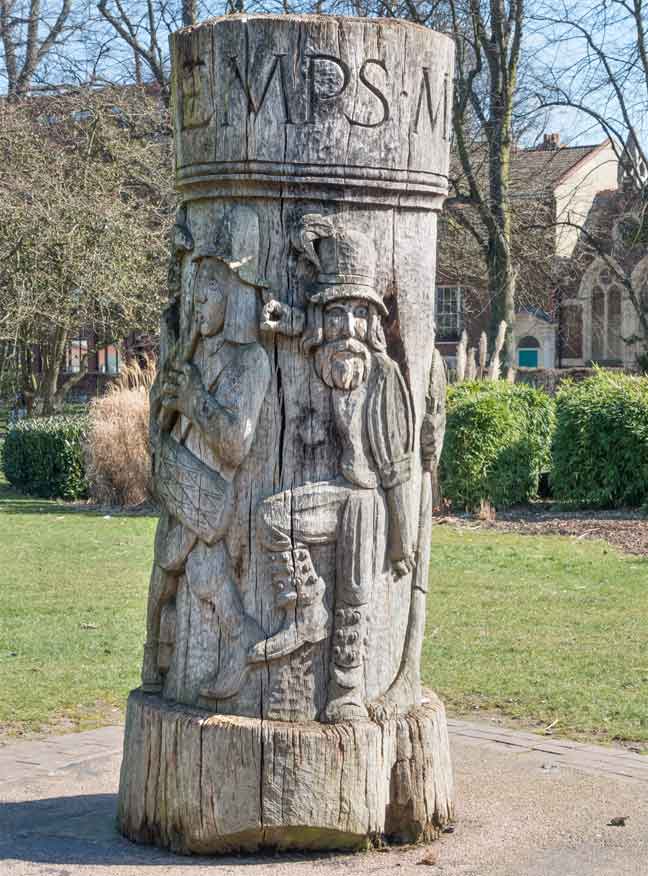 Right: A carving, in Chapelfield Gardens, of Will Kemp performing his ‘Nine Daies Wonder’.

The small area of Norwich known as ‘the Maddermarket’ is so named because it is said to have been the place where madder, a dye, was sold when the city was an important centre of the woollen trade. The dye, the use of which can be traced back to ancient Egyptian times, was derived from the roots of the common madder plant, Rubia tinctorum, also known as dyer's madder, and produced colours which ranged from reds to browns depending on factors such as the type of soil in which the plant was grown and the technique used to apply the dye to the fabric.

A wall plaque in St John's Alley commemorates Will Kemp's ‘Nine Daies Wonder’ of 1599. Kemp, an actor and dancer best known for playing the clown in several of Shakespeare's plays, performed a morris dance from the Lord Mayor's house in London to the Mayor's house in Norwich. The dance took him nine days which, with rest days in between, were actually spread over a period of twenty-three days. Hemmed in by the throng of people which had gathered to see him in the narrow alley, he leapt over the wall of the adjacent churchyard of St John Maddermarket to make his way to the nearby mayor's residence to complete his journey.