Home > Around and About > Hemblington Church 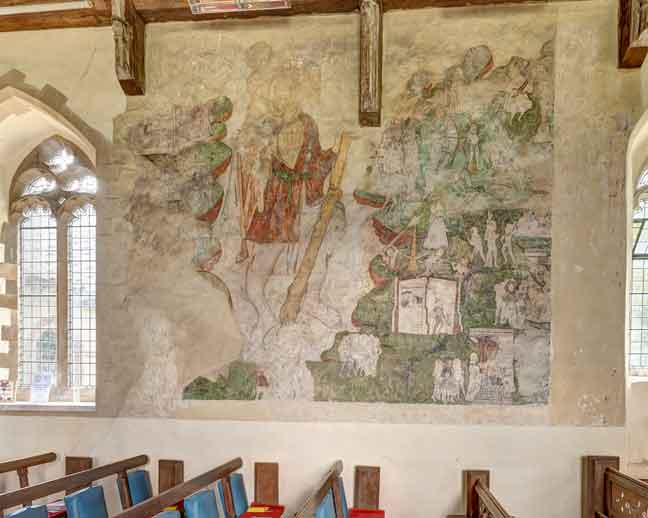 The mural depicting the life of St Christopher. 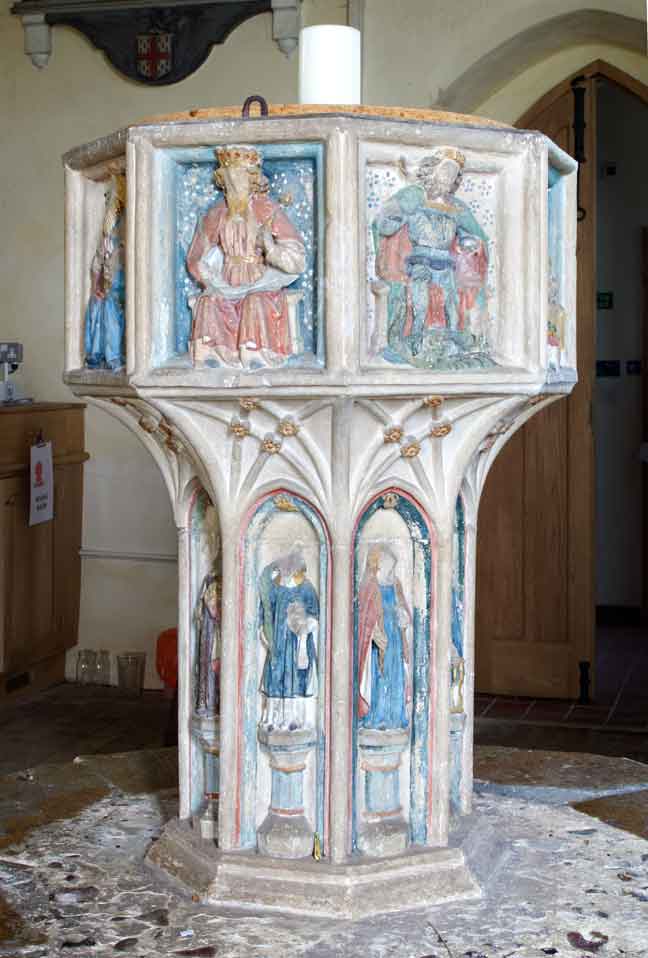 The lovely, Grade I listed church of All Saints, Hemblington stands some eight miles east of Norwich, surrounded on all sides by open fields, in the gently rolling landscape so typical of this part of Norfolk.

The church, which has been awarded the accolade of ‘Most Welcoming Church’ by the Diocese of Norwich, is lovingly cared for and is an absolute joy to visit.

The fabric of the nave and chancel is mostly 14th- and 15th-century. The round tower – a feature common to many churches in Norfolk* – is much older, possibly as early as Saxon.

Upon entering the church via the south porch one immediately catches sight of the large 15th-century wall painting on the north side of the nave. For centuries it had been concealed from view behind layers of whitewash first applied at a time when images in churches were no longer allowed, either during the Reformation or later under Cromwell. Revealed and expertly preserved in 1937 by a team of conservators led by Professor E.W. Tristram of the Royal College of Art, it depicts the legend of St Christopher, the patron saint of travellers and a frequent theme for medieval church murals. These were usually painted in a prominent position on the wall opposite the entrance so that, as here, they were seen immediately on entering the building. The version at All Saints is one of the finest surviving examples and shows St Christopher straddling a river while carrying Christ as a child on his shoulders. To the left are scenes, no longer clearly visible, of his early life as the heathen giant Reprobus before his conversion to Christianity. On the right are ten scenes, much better preserved, depicting episodes from his subsequent life and martyrdom.

The octagonal font, at the west end of the nave, is also 15th-century, and depicts sixteen saints and martyrs, with symbols representing their lives. It too was conserved by Professor Tristram in 1937 and recoloured to restore it to its original appearance.

The wooden pulpit, together with its back panel and sounding board, are Georgian. In the wall alongside is a piscina – a basin once used for washing the communion vessels. Another piscina may be seen in the wall of the chancel to the right of the altar.

An unusual feature on the north wall is a flight of stone steps which now lead to nowhere, but would have given access to the top of a rood screen. The screen, which separated the congregation in the nave from the priests in the chancel, was taken down many years ago, possibly around the time of the Reformation.

At the time of writing, All Saints is open every day from around 9:30 am to 5 pm. Although the main entrance is through the south door, a new north porch with a wheelchair accessible W.C. was added in 2015, and the previously bricked up north door was reopened to give an alternative, wheelchair friendly entrance into the church.

The church is most easily reached from Norwich by travelling east along the A47, the main road between Norwich and Great Yarmouth. Stay on the A47 at the Brundall roundabout and after a further 2.7 miles turn left onto Dell Corner Lane at the junction signposted ‘Burlingham Green’. The church is only a little over a mile further on along narrow country lanes, but the peace and tranquility of its setting belies its close proximity to the hustle and bustle of one of the busiest roads in Norfolk. For sat-nav users the nearest postcode to the church is NR13 4EF. The GPS coordinates are 52.650537, 1.476971.

* Norfolk has the highest concentration of round tower churches in the country. The Round Tower Churches Society reports that of some 181 examples in England, 126 are in Norfolk. The reason for this is not clear. One theory is that it was due to a lack of local stone as a building material. There was an abundance of flints, however, but while these could be set in mortar and used as the facing for buildings they could not be easily cut, and so were not suitable for producing corners. By building towers which were round rather than square the limited supplies of stone could be reserved for the corners of the main structure of the church.

The mural depicting the life of St Christopher.

Above: The mural depicting the life of St Christopher.