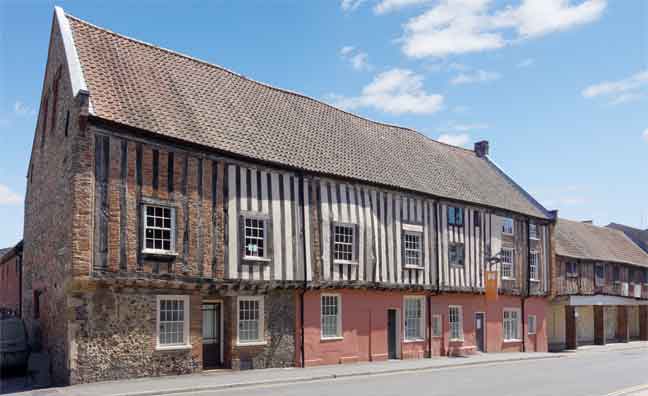 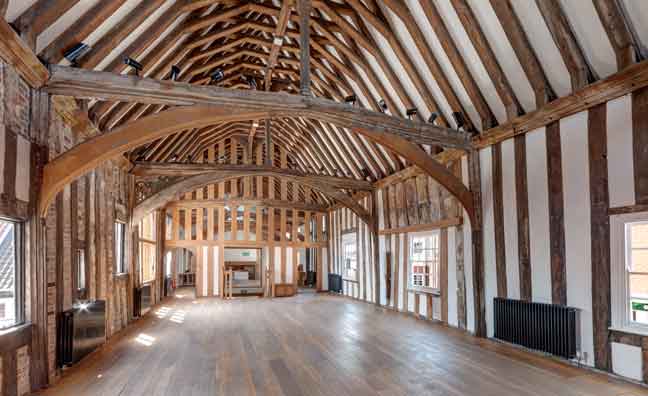 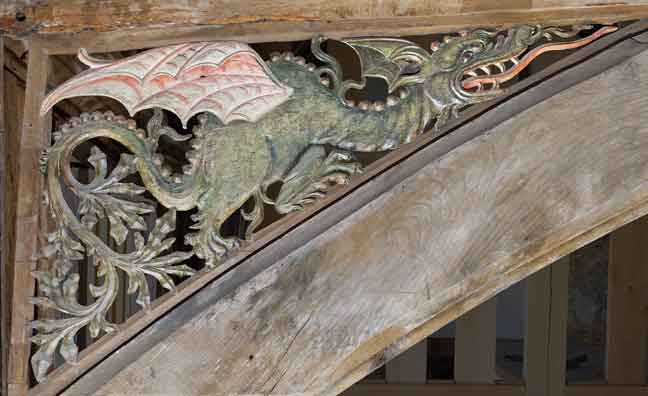 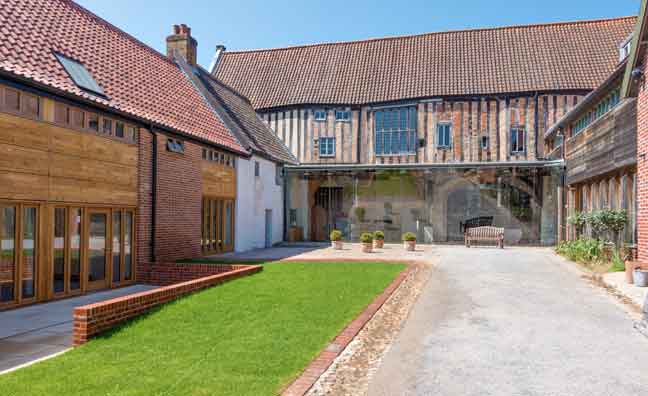 Dragon Hall is a unique, Grade 1 listed, medieval trading hall situated on historic King Street at a point where the road runs close to the river Wensum, about ten minutes’ walk due south from Norwich Cathedral.

The history of the Dragon Hall site can be traced back to Anglo-Saxon times. A number of archaeological digs undertaken between 1980 and 2005 revealed that there were buildings here as early as the late tenth century. By the thirteenth century the Abbey of Woburn in Bedfordshire had a fish processing operation here, with a curing house and a track running down to a quay heading on the river. By about 1330 an ‘L’-shaped hall-house, complete with a large vaulted undercroft, had been built on the site as a domestic property.

In the 1420s the site was acquired by Robert Toppes (c.1400-1467), a mercer, merchant and entrepreneur dealing mainly in the import and export of textiles and fancy goods. At the time Norwich was a major centre of the woollen trade and well on its way to becoming the second most important city in England, and was already trading extensively with the Low Countries and the Baltic. Toppes built a timber-framed trading hall, some 27 metres in length and with a magnificent crown post roof, at first floor level over the existing house and used it as a showroom to display his wares and to impress his customers. Recent tree ring dating has shown that the oak trees used in its construction were felled in the spring of 1427. This dates the building of the hall to the same year or soon after, as oak was used when first felled, while it was still green and more easily workable. Toppes would have chosen the site for its excellent location sandwiched between the river and what was then known as Conesford Street, the major north-south route into Norwich and beyond. The hall's own quay would have allowed the transport of goods by barge directly between the hall and the port of Yarmouth, some twenty mlles downstream, with its already established shipping routes to continental Europe and coastal routes to London and other ports in England.

Little is known about Toppes' origins and upbringing. Although he was to become one of the city's wealthiest men and one of its leading citizens it is not known how, at the age of no more than twenty-seven years, he had already amassed the considerable sum of money needed to fund such a large enterprise as the building of Dragon Hall. It has been suggested he may have come from an already wealthy family, perhaps from as far afield as the Low Countries. He was appointed city treasurer at the time he built Dragon Hall and went on to be mayor four times and one of the two burgesses for Norwich at least five times, representing the city in Parliament (an MP in today's terms). Over the years he acquired several other properties in Norfolk and Suffolk and it is thought he may also have been active as a money lender. In his will¹ Toppes instructed that after his death his trading hall was to be sold, with the proceeds to pay for two priests to pray for his soul and those of his wife and family. He also left a bequest to each of the fifty-one parish churches in Norwich, to several others around Norfolk, and to other good causes – at the time Catholic doctrine decreed that such charitable acts would speed the donor's soul through Purgatory.

Following the sale the hall was divided internally into a number of properties, which over the ensuing years were further divided. New floors were put in to create attic rooms and at the ground floor level new entrances from the street were created. Subsequently the view from the street was of what appeared to be a terrace of several individual properties, and all knowledge of the building's origins as a trading hall was lost. By the nineteenth century a cluster of crowded tenement houses had been built in the yard leading down to the river. Most of these were demolished in the slum clearance of 1937, but the hall itself remained divided into separate properties. By the 1950s the northern end was a butcher's shop, the southern end was a public house, the Old Barge Inn, which finally closed its doors in 1969, and in between was the rectory for the nearby churches of St Julian and St Peter Parmentergate.

In the 1970s a detailed survey, undertaken by the University of East Anglia, recognised the building for what it was, and its significance as an important part of the city's heritage was established. Thus began a complex project of investigation, planning and restoration, lasting more than 30 years, to return the hall to its former splendour. In 1979 the city council bought the site from its then owners, the Norwich Brewery Company, and in 1986 the Norfolk and Norwich Heritage Trust was established to manage the restoration.

During work to remove partition walls and attic floors an exquisitely carved dragon of Baltic oak was discovered in one of the roof spandrels². It is thought that similar dragons would have been present in each of the spandrels, but only the one has survived. It was from this discovery that the hall gained its present name – in his will Robert Toppes referred to it only as Splytt’s, possibly the name of a previous owner.

In 2015 tenancy of the hall was taken over by the Writers’ Centre Norwich, which three years previously had led the successful bid for Norwich to be recognised as a UNESCO City of Literature, the first in England. Further extensive renovation of the site and the building of a new south wing began in 2017, and in the summer of 2018 Dragon Hall re-opened as the National Centre for Writing, a physical and virtual space for writers, literary translators and those working in the world of literature to meet, learn and collaborate. Please click here to visit their website.

To read more about the history of Dragon Hall and its restoration, and for information about current opening times and tours, please visit the website of the Dragon Hall Heritage Volunteers, here.

Dragon Hall is one of the Norwich 12, a collection of twelve of the most iconic buildings in Norwich, with architectural styles spanning the Norman, medieval, Georgian, Victorian and modern eras.

2. Spandrel: the roughly triangular space between the outer curve of a roof arch and the cross-beam above it.