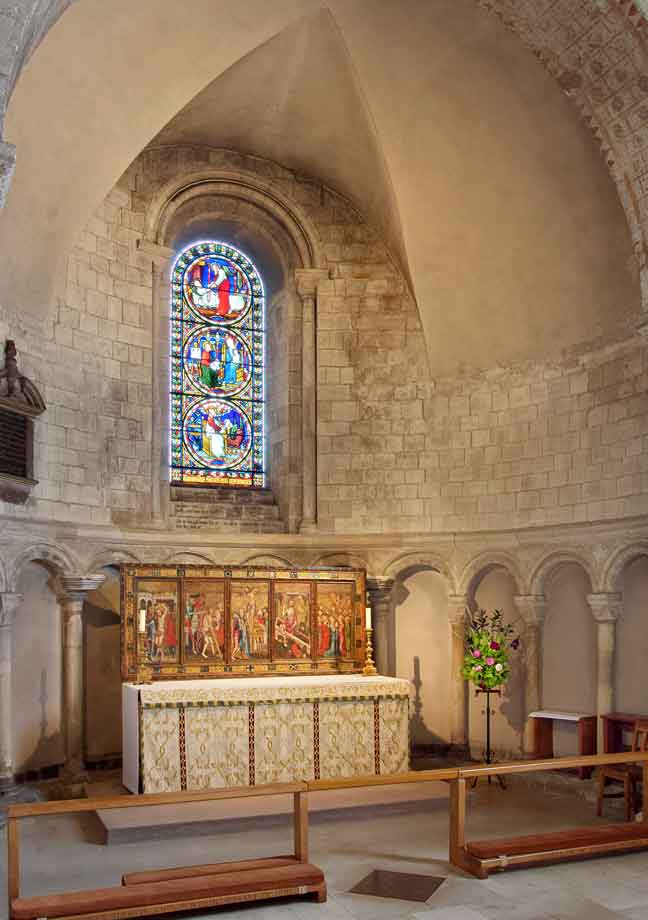 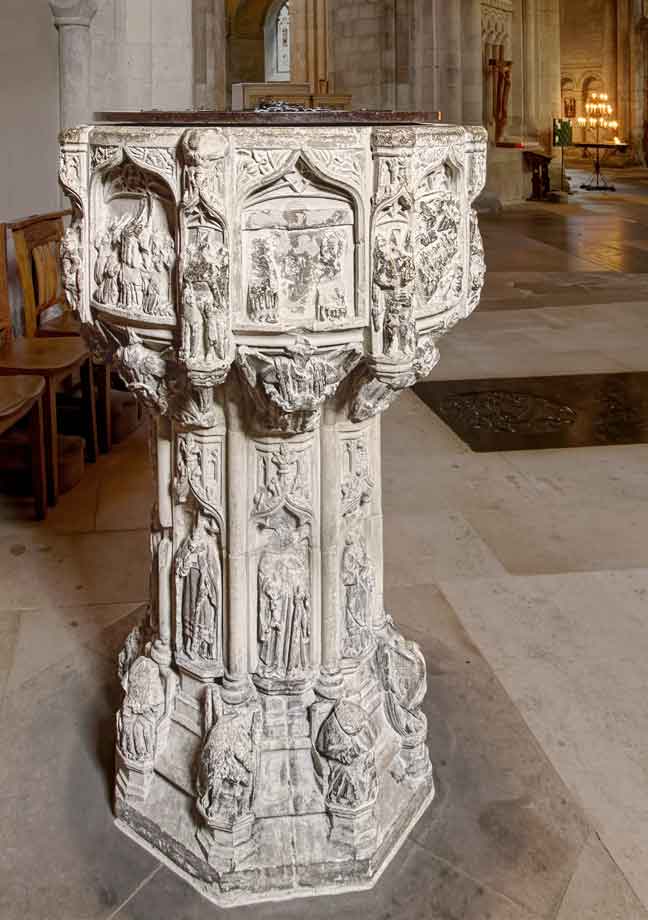 Of the many treasures in Norwich Cathedral one of the most important is the Despenser Retable, which forms the altarpiece in St Luke's Chapel, situated at the south-east end of the cathedral.

The retable dates back to c.1382 and is one of the finest surviving examples of late fourteenth century church art anywhere in Europe. It is thought to have been commissioned, possibly from a local artist, by the bishop at the time, Henry le Despenser, as a thank-offering following his involvement in the suppression of the Peasants' Revolt in Norfolk in 1381. In five panels, still vibrant in colour and quite exquisite, it depicts scenes from Christ's Passion, the Resurrection and the Ascension, all set against backgrounds of finely moulded and gilded gesso. At some point in time, probably either at the Reformation or during the Civil War, it was removed from view, turned upside down and used as a table top, thus saving it from the defacement suffered by much ecclesiastical art in England at the hands of the Puritans. It remained in use as a table in a workshop elsewhere in the Cathedral until 1847 when, so the story goes, someone dropped something which rolled underneath it. While retrieving the object they happened to look up, and the retable was rediscovered. The top section of the frame and the uppermost of the five horizontal boards on which the scenes had been painted were missing, and legs had been added at the four corners. In 1958 a reconstruction and restoration by the eminent paintings conservator, Pauline Plummer, included replacing the missing board and painting onto it the upper part of the figure of Christ to once again complete the central panel depicting the Crucifixion. Following the restoration the retable was returned to its original liturgical use as an altarpiece.

Henry le Despenser was born of French-Norman descent in c.1341–3. As a young man he had received military training and had served in Italy in the army of Pope Urban V. Subsequently the Pope appointed Despenser, then still only in his late twenties, as Bishop of Norwich, a position he held from 1370 until his death in 1406. During his episcopate he earned the nickname ‘the Fighting Bishop’, mainly due to his involvement in suppressing the Peasants' Revolt, the uprising which sought a reduction in the high rates of taxation levied to finance the Hundred Years War, and an end to serfdom, the feudal system of unpaid labour. Although the rebels' leader, Wat Tyler, was killed during a skirmish in London, the revolt had spread to East Anglia, and in June 1381 Despenser and his forces overcame the rebels at the Battle of North Walsham. Their local leader, Geoffrey Litster, a textiles dyer, was captured and sentenced to death. It is said that after sentence was passed Despenser heard Litster's confession, gave him absolution and accompanied him to the place of execution to administer a final blessing.

St Luke's Chapel is situated just off the southern side of the Ambulatory, the processional route which runs around the east end of the Cathedral. Originally dedicated to St John the Baptist, this lovely little Norman chapel was given its present name in the fifteenth century because of its use by the Guild of St Luke, which represented the city's glaziers and plumbers. To this day it also serves as the parish church of St Mary-in-the-Marsh, a pre-Conquest church which stood just to the south of the site of the present cathedral. After the Reformation it was declared redundant and was destroyed in c.1570. Its parishioners were granted the use of St Luke's Chapel, and they brought with them their font from the earlier church. Dating from the fifteenth century, it is an example of the 'Seven Sacraments' fonts found predominantly in East Anglian churches. Octagonal in shape it illustrates the seven sacraments of the Catholic Church – baptism, confirmation, penance, Eucharist (holy communion}, ordination, marriage and extreme unction (anointing the sick and dying). The eighth side depicts the Crucifixion. The font, like most others of the period, was severely damaged by the Puritans, with the heads of all the figures crudely chiselled off.

The Despenser Retable, the font and St Luke's Chapel were photographed with the kind permission of the Dean and Chapter of Norwich Cathedral. For much more information about Norwich Cathedral click here to visit the Cathedral website.

Retable: A shelf or ornamental panel placed above and immediately behind an altar, e.g. an altarpiece. From the Latin retrotabulum – literally 'behind the table' – later shortened to retabulum.