An enclosed precinct with an area totalling 44 acres, Norwich Cathedral Close is the largest of all the English cathedral closes and surely must be the loveliest. On entering the Close visitors immediately find themselves in a haven of peace and tranquility, free from the bustle and hubbub of the busy city streets.

The Close comprises two distinct parts – the Upper Close and the Lower Close. The Upper Close is a large lawned area bounded to the east by the Cathedral itself, to the north by the buildings of Norwich School and to the west and south by properties mostly occupied by local businesses. The photograph, above, looks north and shows to the right the new Hostry, opened in 2009 and built on the site of the original guest house of the Benedictine priory.

Entry to the Upper Close from the city centre via Tombland is by either the Erpingham or Ethelbert gates. The former, at the northwest corner of the close, leads directly to the Cathedral's Great West Door, and dates from c.1420. It was given to the city by Sir Thomas Erpingham, a Norfolk knight and city benefactor. It was he who was instrumental in obtaining for Norwich the civic charter of 1404, granted by Henry IV, which allowed the election of a mayor and two sheriffs and effectively gave Norwich city status and autonomy from the county. Sir Thomas is possibly best remembered as the commander of Henry V's longbow archers at the Battle of Agincourt in 1415, and is buried in the cathedral's presbytery.

The Ethelbert Gate gives entry to the Upper Close at the southwest corner, and takes its name from the Saxon church of St Ethelbert, which stood nearby and was destroyed, together with the original gateway, in the citizens' riot of 1272. A new gateway, with a chapel over the arch, was built in c.1316 on the orders of Henry III as reparation for the damage caused.

A lane leads from the Ethelbert Gate through the Upper Close and down to the Lower Close, ending at the River Wensum, Pull's Ferry and the Riverside Walk and passing on its way a green with many pretty and quaint residential properties, some dating from as early as the fourteenth century. Immediately before the green another lane leads off to the south door of the Cathedral, passing the Cloister before winding around the east end of the Cathedral and Life's Green, where can be found the grave of Edith Cavell, the Norfolk nurse and heroine executed in 1915 for assisting Allied soldiers to escape from German occupied Belgium. Her memorial stands on Tomband, just outside the Erpingham Gate.

At its lower end the lane leading to the river becomes Ferry Lane, and passes the playing fields of Norwich School, following the route of a canal, long since filled in, which was dug by the Normans to deliver stone and other materials from the river directly to the building site of their new cathedral and priory.

Norwich School dates back to the founding of Norwich Cathedral by Bishop de Losinga in 1096. Medieval records show the existence of an episcopal school which continued until the dissolution of the monasteries, following which it came under the control of the city. Refounded by royal charter as the King Edward VI Grammar School in 1547 the school moved into the by then disused Carnary Chapel adjacent to the west front of the Cathedral in 1551. The chapel, the undercroft of which was originally used as a charnel house to store the bones of those awaiting resurrection, was used as the main classroom of the school until the nineteenth century. Reconsecrated for religious use in the twentieth century it now serves as the school chapel. 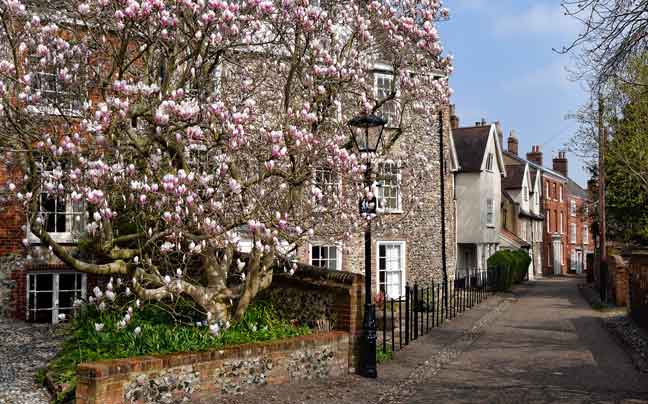 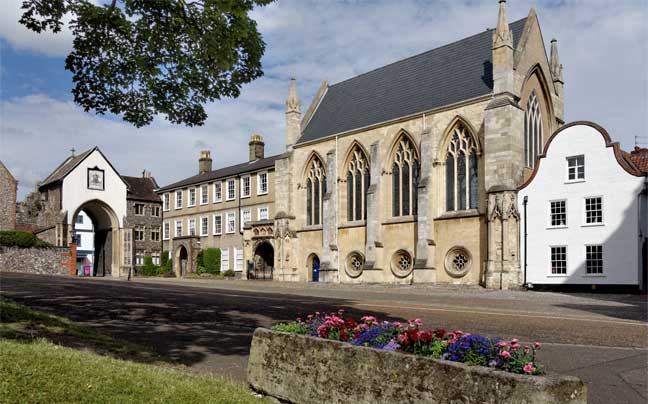