The west window of Norwich Cathedral is a stunning and important example of the early Victorian revival of the medieval techniques for producing brightly coloured stained glass, which were all but lost following the Reformation and the dissolution of the monasteries in the sixteenth century.

The stone tracery of the window was installed during the time of William Alnwick, who was Bishop of Norwich from 1426 to 1436, and is a close copy of that of the west window of Westminster Hall in London. Nothing is known of the original glazing, which was destroyed and replaced with plain glass, probably at the time of the Reformation.

The present glass, installed in 1854, was designed and made by George Caleb Hedgeland (1825–1898), the highly acclaimed stained glass artist whose other works include the window at the east end of Jesus College Chapel, Oxford.

In medieval times the colours of stained glass were produced by adding metallic oxides to a pot of molten glass in the furnace, creating what is known as ‘pot metal glass’. A glob of this molten glass was affixed to a metal blowpipe and blown into a cylindrical shape, which was then slit and laid out to form a sheet. Glass thus produced was often very dark in colour, and an alternative process, known as ‘flashing’, was devised whereby a glob of molten but as yet uncoloured glass was dipped into a pot containing molten glass of the desired colour. When this was blown and formed into sheets the result was in effect a laminate consisting of a thin layer of coloured glass fused to a base layer of clear glass. This produced brighter colours, particularly in the reds, while at the same time saving money — red often being produced by the addition of oxide of gold. This method also had the advantage that the colour could be selectively removed, either by scraping or engraving the coloured side of the sheet or by etching it with acid, to give lighter detail to the design being created. Darker detail, for defining faces, hands, etc. and shading were added by drawing or brushing on one or both sides of the glass, using a dark brown or black paint containing iron oxide and finely powdered glass. The painted glass was returned to the furnace and heated to a point at which the powdered glass melted and fused permanently onto the just softened surface of the sheet.

Following the Reformation and the subsequent puritanism which abhorred any extravagance in church decoration, the colourful glazing of many windows was destroyed and replaced with plain glass. Demand for stained glass declined dramatically and through the next two centuries much of the skill of making coloured glass was lost. By the eighteenth century stained glass production was reduced to painting the design, often in the style of well known oil paintings, onto sheets of plain, uncoloured glass.

The revival of the medieval processes in the early nineteenth century was largely due to the endeavours of one man, Charles Winston, a London barrister and amateur stained glass enthusiast. He had fragments of medieval coloured glass chemically analysed, and thus rediscovered the lost processes of what was at that time known as ‘antique’ glass. The revival was swift, and at the Great Exhibition of 1851 at Crystal Palace no less than twenty-five English makers of stained glass, including Hedgeland, exhibited their new found skills.

The intensity of colour achieved by Hedgeland is outstanding, so much so that in the 1870s, by which time the fashion for church decoration had again become more conservative, the colours were deemed to be too vivid and the appearance of much of the window was muted by the application of a dark varnish.

Restoration and thorough cleaning in 1995 returned the window to its former glory. 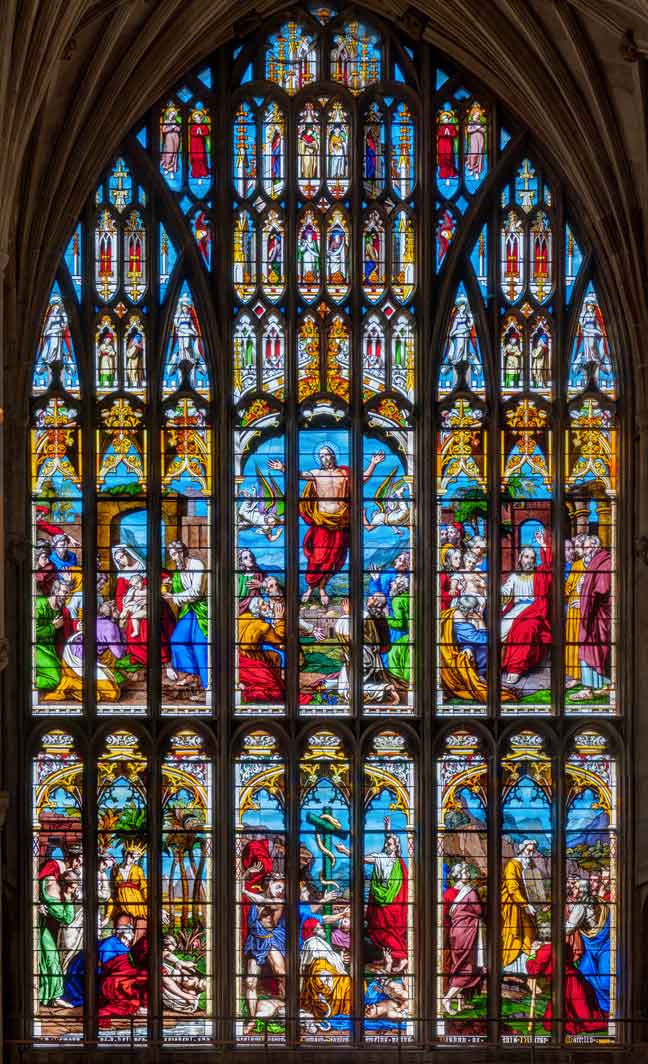 Of the six main panels of the window the lower three depict scenes from the Old Testament. These are as follows — 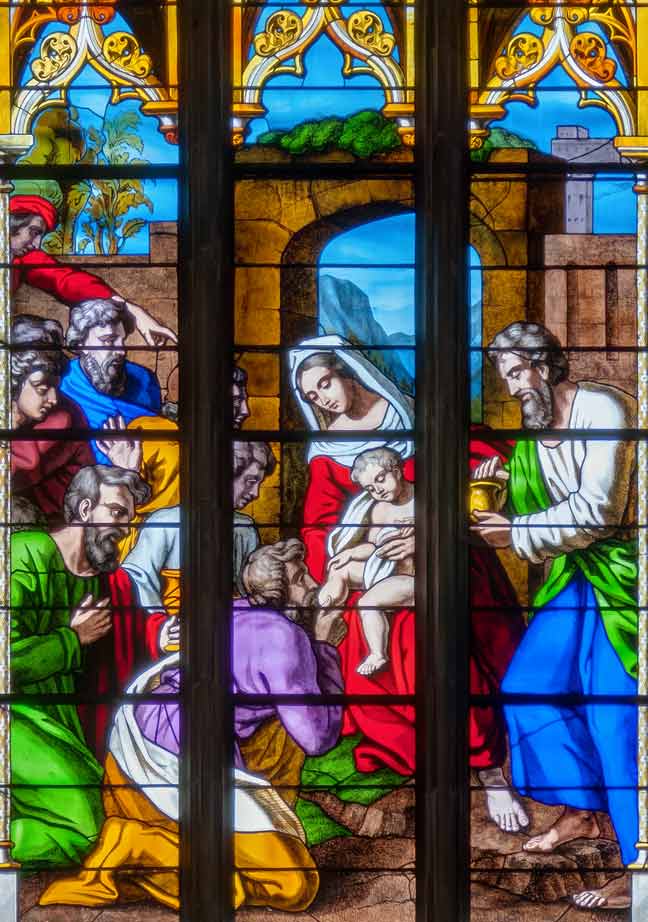 The Nativity of Christ 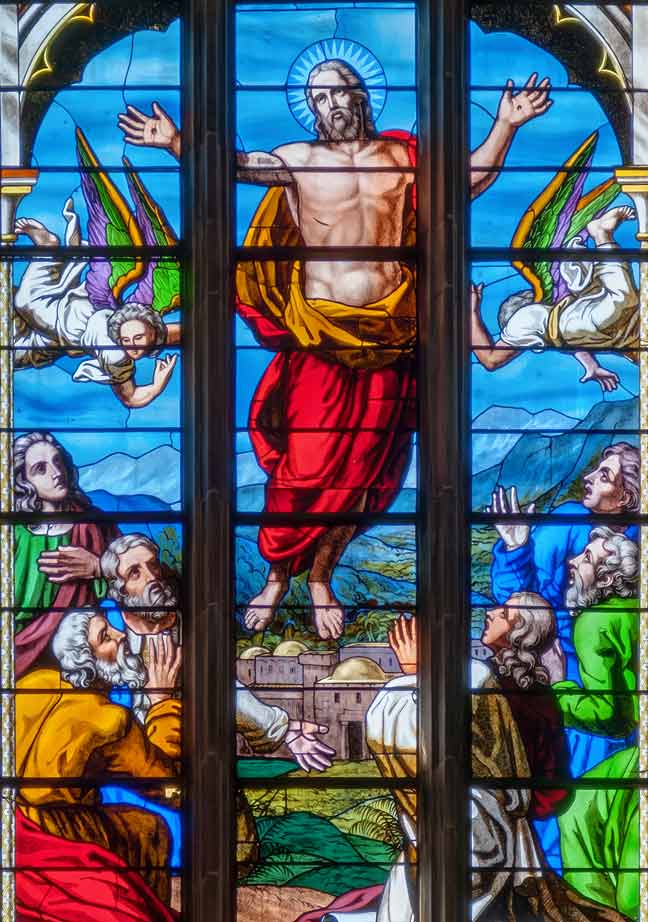 The Ascension into Heaven 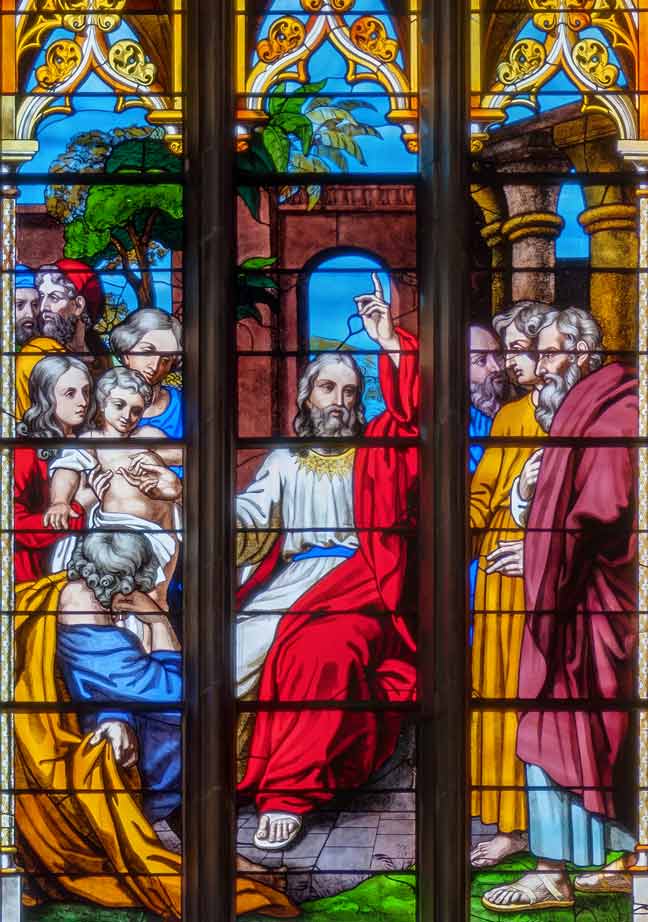 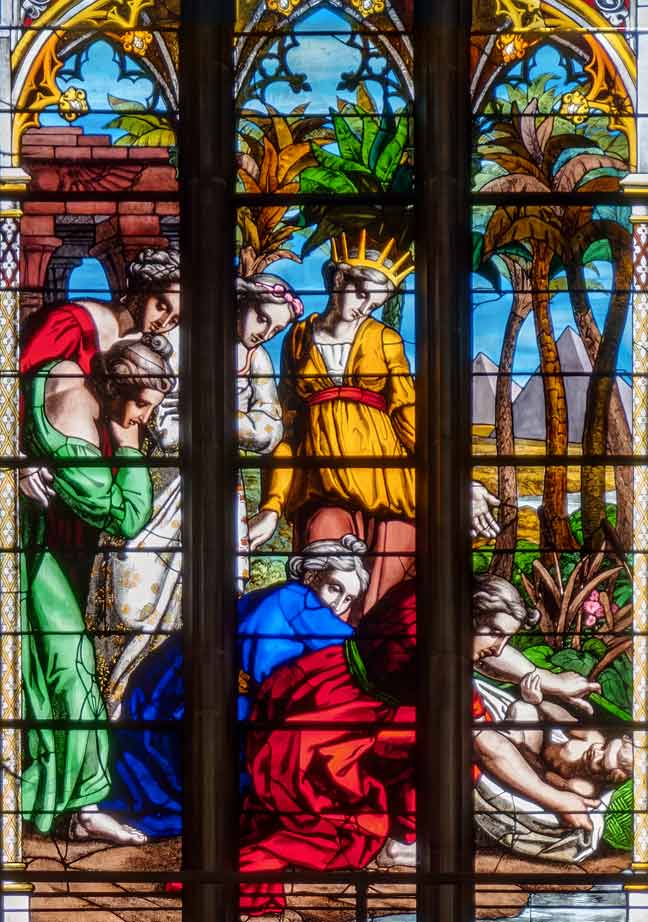 Moses found in the bulrushes 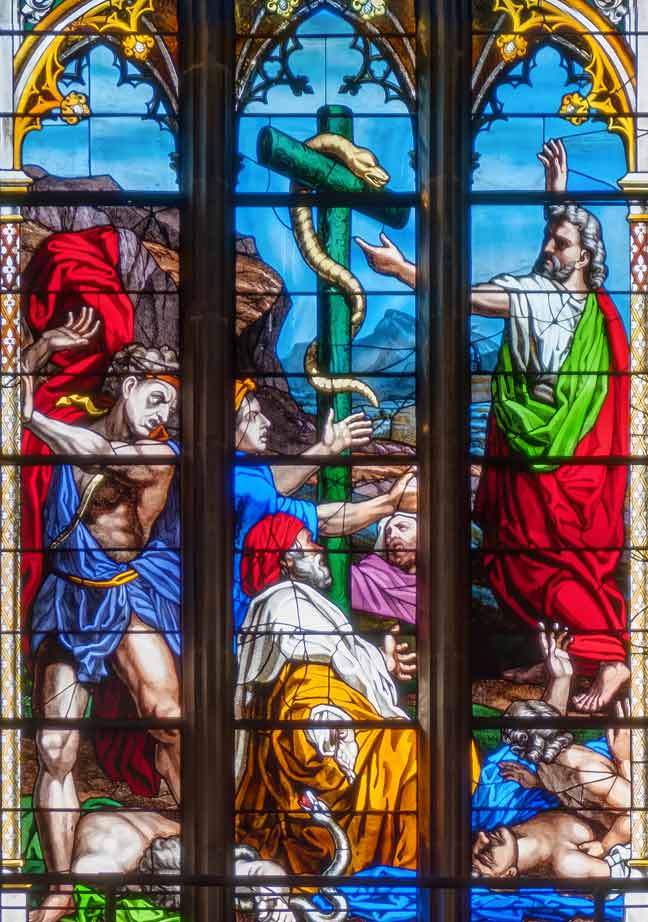 Moses and the brazen serpent 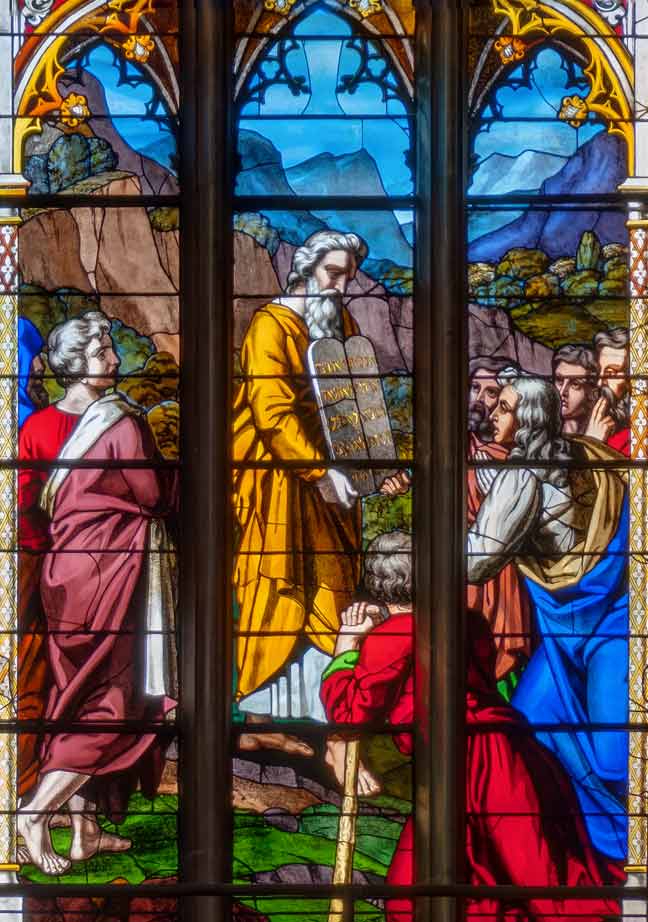 Moses and the Ten Commandments

Of the six panels of the window the lower three depict scenes from the Old Testament. These are as follows —

The upper three panels depict scenes from the New Testament, and are as follows —