Dedicated to the Holy and Undivided Trinity, Norwich Cathedral dates from just after the Norman Conquest. With most of its original architecture still intact, it is one of the finest examples of the Romanesque style in Europe.

The cathedral was founded by the Norman bishop Herbert de Losinga as the cathedral priory of the Benedictine monastery in Norwich. Previously, while in the position of prior at the Abbey of Fécamp in Normandy, de Losinga received an invitation from William II to come to England, and subsequently he was appointed Abbot of Ramsay in what is now Cambridgeshire. At this time Norwich fell within the episcopal see based at Thetford, to where it had been moved from Elmham, its earlier Anglo-Saxon location. When the bishopric became vacant de Losinga indicated that were he to be appointed as bishop he would pay into the royal treasury a considerable sum of money. Under church law, however, offering money for favours constituted the sin of simony. Nevertheless, the sum of £1900 changed hands and the appointment was duly made. Legend has it that a repentant de Losinga visited the Pope in Rome to make atonement and seek absolution. In 1094 he relocated the see to Norwich in accordance with a decree issued by the Archbishop of Canterbury which required a bishop's see to be in the principal town of the diocese.

The location chosen by de Losinga for his new cathedral and priory was in an area then known as Cowholme, close to the river and to the intersection of two roads going back to Roman times. A Saxon settlement, including two churches, was cleared to make space for the new buildings and their precincts, a total of 44 acres. The riverside location was important, allowing the stone to be brought by sea, much of it from Caen in Normandy, through the port of Yarmouth and thence up the rivers Yare and Wensum to Norwich and finally via a specially constructed canal directly to the building site.

The foundation stone was laid by de Losinga himself in 1096 and building continued during the remainder of his episcopate, in which time he also founded the church of St Nicholas in Great Yarmouth, that of St Margaret in King's Lynn, and Norwich School. The latter still holds its morning assembly in the Cathedral nave. Much of de Losinga's correspondence still exists and shows him to have been an able bishop, an efficient administrator and a wise counsellor. He died in 1119 and was interred within his cathedral. His tomb lies in the middle of the presbytery, immediately in front of the high altar.

The Cathedral's main structure was completed by the time of the retirement in 1145 of de Losinga's successor, Eborard of Montgomery.

In Roman times the early followers of Christianity were forbidden by law to build their own churches but were allowed to use public buildings, or basilicas. These were usually oblong in shape and often used for lawmaking, with an aisle to each side and a semicircular apse to one end containing the judge's seat. Placing an altar in front of this made the building eminently suitable for worship, and when Christian churches were built from the fourth century onwards they were often constructed in this form. Norwich is the only cathedral north of the Alps to have retained this principle, with the bishop's throne, or cathedra, behind the altar and facing the worshippers. The present throne is modern, but sits over two ancient stones which are thought to be the remains of the bishop's throne from when the see was at Elmham and to have been brought to Norwich by de Losinga.

Initially the cathedral had no spire, just the square tower, which remains as the largest Norman tower in England. A wooden spire was added in 1297, but blew down in the severe gales of 1361. It was rebuilt but in 1463 it was struck by lightning, caught fire and collapsed through the then wooden roof of the nave, the resulting conflagration causing much damage. The present spire, of brick faced with stone, was erected in 1480 and, at 315 feet (96 metres), is second in height in England only to that of Salisbury Cathedral.

Fire had visited previously in 1272, when a dispute between the priory and the townspeople erupted into violence, resulting in a major blaze which caused extensive damage to the priory, including the cloister and to the Cathedral itself. The effects of these fires and a later one in 1509 can still be seen in places where the stonework has taken on a pinkish discolouration caused by the intense heat.

The Dissolution of the Monasteries during the reign of Henry VIII brought an end to the Benedictine priory, but in a relatively gentle manner. The bishop of Norwich at the time, William Rugg, had pleased Henry by signing a statement declaring that the Pope had no authority in England. Subsequently the prior, William Castleton, became the first Dean of Norwich, the monks became canons and life continued much as before.

In 1643 a Puritan mob loyal to Cromwell and his Parliament ransacked the Cathedral, destroying monuments, tombs and windows, tearing up memorial brasses, and carrying off vestments, books and anything else combustible to be burned on a huge bonfire in the marketplace. The Dean and Chapter were unable to resume office until the restoration of the monarchy in 1660.

Norwich Cathedral has more than one thousand roof bosses, the decoratively carved and painted heads of the keystones essential to the construction of a ribbed vaulted ceiling. Those in the nave tell the history of the world, from the Creation to the Day of Judgement, while those in the Cloister, which are earlier, show subjects ranging from simple foliage to scenes from the Passion of Christ and the Apocalypse.

Also worth viewing are the misericords in the Choir. These are the elaborately carved undersides of the hinged seats in the stalls. When the seats were raised small projections offered a degree of support to the monks, often aged and sometimes infirm, who were expected to stand for prolonged lengths of time while performing their devotions. The name is derived from the word misericordia, the Latin for mercy. 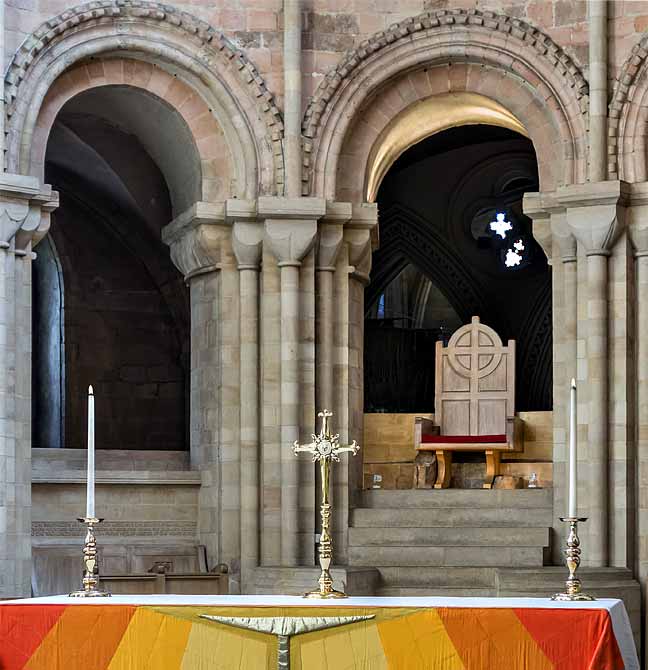 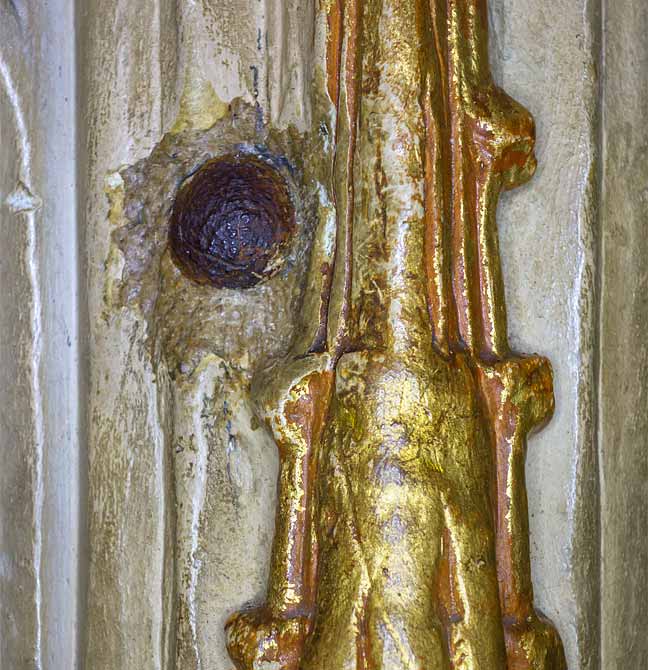 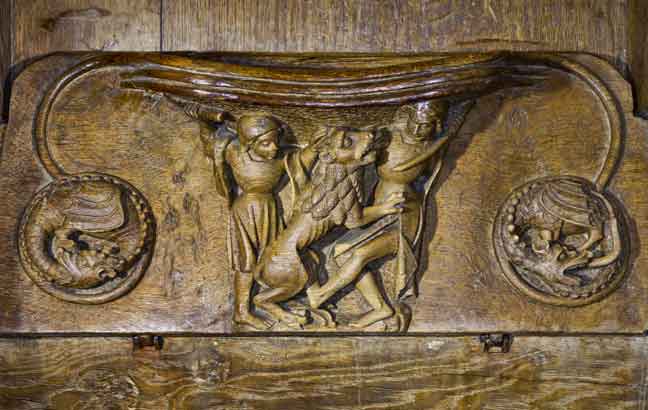 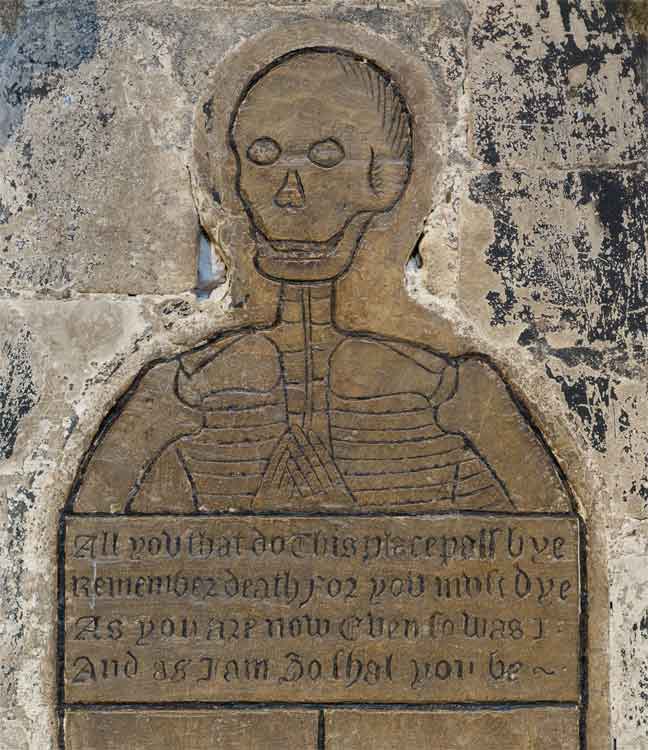 The memorial to Thomas Gooding, on the south side of the nave.

The memorial to Thomas Gooding, on the south side of the nave. The inscription reads –

Above: One of the many misericords in the choir stalls.

Left: The memorial to Thomas Gooding, on the south side of the nave.