Home > Around and About > Blickling Estate

CLICK HERE to take a virtual tour of the house 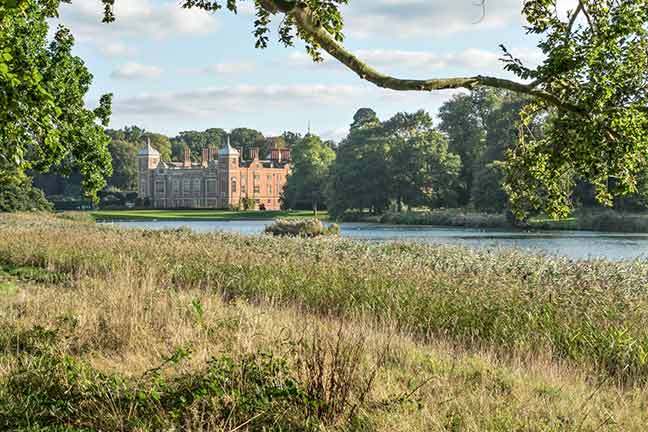 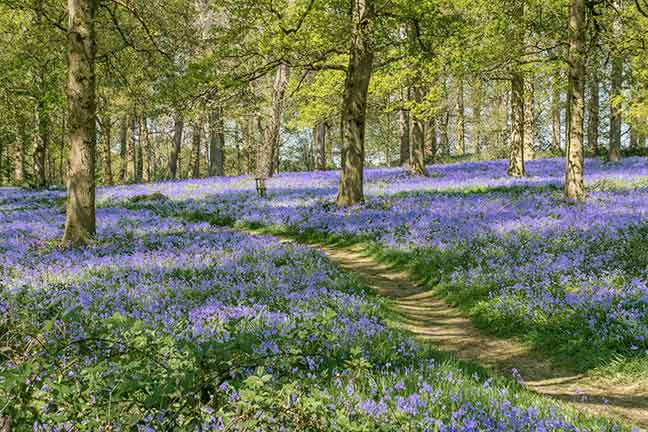 The road to Blickling from the lovely market town of Aylsham, some twelve miles north of Norwich, is winding and in places little more than a country lane, narrow with high hedges to either side. But as it passes Blickling church the view opens up and suddenly, with no prior warning, you get your first sight of the stunning, red-brick mansion. The effect is breathtaking and unforgettable.

The Blickling Estate, a property in the care of the National Trust since 1940, has much to offer its visitors, with a broad appeal to those of all ages. Its 4,622 acres, much of which is arable farmland, include the Jacobean house, a lake and some 950 acres of woodland, parkland and gardens for visitors to explore.

In the house, the building of which was completed in 1627, the rooms are displayed much as they would have been in the time of Philip Kerr, the 11th Marquis of Lothian, who was the last private owner of the estate and who bequeathed it to the National Trust. It was he who was instrumental in establishing the National Trust Act of 1937, which allowed the transfer of country houses and their estates to the Trust in lieu of death duties, thus preserving Blickling and many other fine properties for us to enjoy today.

The park offers several miles of trails to be discovered, either by foot or on cycle, and for which maps are available at visitor reception. Three cafés serve light meals, snacks and hot and cold drinks, with much of the menu sourced from within the estate. Adjoining the house are a gift shop, a well-stocked used book shop, an art gallery with regular exhibitions and the Royal Air Force Oulton Museum, which documents the history of RAF Oulton, a Bomber Command base which played an important role in the Second World War and whose officers were billeted within the house.

Adjacent to the house is the Buckinghamshire Arms, a traditional seventeenth century pub and former coaching inn, serving meals and real ales and offering bed and breakfast accommodation.

For information about what's on at Blickling and opening times please click here to visit the official Blickling Estate website. 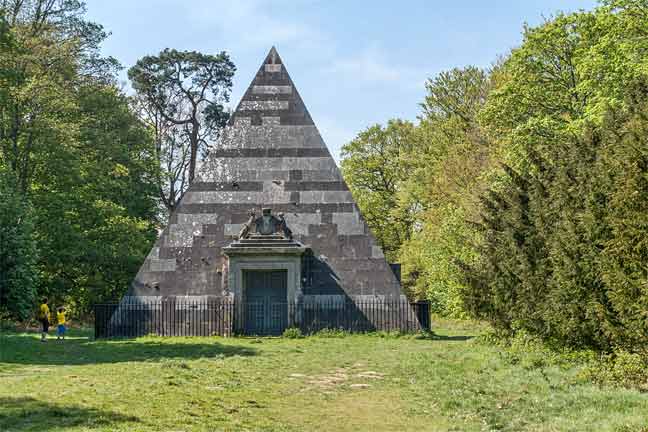 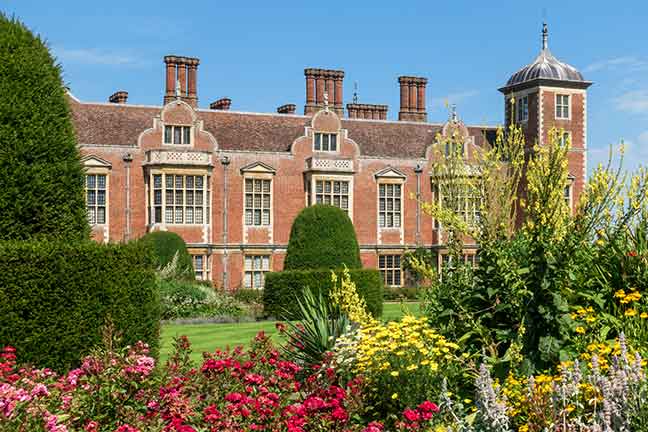 A history of Blickling
The name Blickling derives from the Old English Bekeling, which means a water-meadow around a stream. The Manor of Blickling is recorded in the Domesday Book and had belonged to King Harold, but after the Norman Conquest it was given by William I to his chaplain, Herfast, bishop of Thetford. When the episcopal see was subsequently transferred from Thetford to Norwich, Blickling remained the country palace of the bishops. Some years later the manor was divided into two parts. The bishops continued to use the northern section until the Reformation, while the southern part passed through several owners before coming into the possession of one Sir Nicholas Dagworth who, in about 1390 and after a distinguished diplomatic and military career, built a rectangular and moated house and settled there.

After Dagworth's death in 1401 his widow sold Blickling to Sir Thomas Erpingham, the Norfolk soldier who in 1415 was to command Henry V's longbow archers at the Battle of Agincourt. Sir Thomas died in 1428 and was laid to rest in Norwich Cathedral. Blickling was then bought by another famous warrior and local landowner, Sir John Fastolfe, said to be the inspiration for Shakespeare's character Falstaff. By the time of his death in 1459 Sir John had sold Blickling to his neighbour and protégé, Geoffrey Boleyn, at one time Lord Mayor of London and the great-grandfather of Henry VIII's queen, Anne Boleyn.

No record exists of exactly when Anne was born, but many scholars suggest it was c.1501 in which case it is likely that she was born at Blickling and lived there until 1505, when her father, Thomas, inherited the other Boleyn family seat, Hever Castle in Kent. Legend has it that at each anniversary of her execution Anne's ghost returns to Blickling and processes up the grand driveway to the house, carried in a coach drawn by four headless horses, while her father's ghost is compelled to leave Blickling to cross twelve local river bridges before daybreak.

Following the death of Thomas Boleyn in 1539 Blickling passed to his relatives, the Clere family, who reunited the manor with the northern part. The estate remained in their possession until 1616, when it was purchased by Sir Henry Hobart, 1st Baronet of Intwood, a local barrister and politician who had become MP for Norwich and subsequently Lord Chief Justice of the Common Pleas during the reign of James I.

By the time Sir Henry bought the Blickling estate the house had fallen into disrepair, and in 1619 he set about building a new mansion on the site of the old, employing the services as architect of Robert Lyminge, who some five years earlier had completed the construction of Hatfield House for the Cecils – both houses are fine examples of typical Jacobean architecture. It is said that Sir Henry visited his new house only once during its construction. He died in 1625, some two years before the building work was completed..

In the eighteenth century major changes were made to the interior of the house by John Hobart, 2nd Earl of Buckinghamshire, possibly the most distinguished of Blickling's owners apart from his great-great-great-grandfather, Sir Henry. He served as ambassador to the court of Catherine the Great of Russia and subsequently as Lord Lieutenant of Ireland. At Blickling he employed the services of local architect Thomas Ivory and his son William to remodel parts of the house, some in a neo-Jacobean style and some in the Georgian style of the day. The changes included enlarging the Great Hall to accommodate an impressive double flight of stairs and constructing an entirely new room to house a large tapestry, a parting gift from Catherine at the end of his tenure as ambassador. After his death in 1793 John left no surviving sons, and the estate passed not to his eldest daughter, Harriet, who had displeased her father by marrying and subsequently divorcing, but to Caroline, his second daughter. Caroline and her husband, later Lord Suffield, employed the architect Joseph Bonomi to construct in the grounds a pyramid-shaped mausoleum, based on the tomb of Cestius in Rome, as a final resting place for the remains of her father and his two wives.

About the time of the 2nd Earl's death his daughter Harriet had remarried, this time to the Earl of Ancram, later to become the 6th Marquis of Lothian. Caroline had no children, so when her husband died Blickling passed to Harriet's son, the 7th Marquis of Lothian. Caroline lived on at Blickling for many more years and it was not until after her death in 1850 that the estate fell into the full possession of the Lothians, by which time the 7th Marquis had been succeeded by his son, William Schomberg Robert Kerr, the 8th Marquis.

William and his wife, Lady Constance, embarked on further changes to the interior of the house. At Oxford William had met John Hungerford Pollen, a decorative painter and architect and an acquaintance of several in the Pre-Raphaelite circle. They employed him to undertake a number of projects in the house of which several survive to this day, including a painted ceiling and an impressive frieze around the Long Gallery. William died in 1870 after a long illness, aged only 38 years. Lady Constance lived on at Blickling for a further thirty-one years, during which she created the lovely parterre garden to the east of the house.

For the next two decades Blickling was occupied only by tenants, but in 1930 ownership of the estate passed to William's nephew, Philip Henry Kerr, the 11th Marquis of Lothian. To meet the death duties which became payable upon his inheritance Philip found it necessary to sell some of the contents of the Blickling library, a collection of some 10,000 books which had come to the house in 1745 following the death of a distant family relative, Sir Richard Ellys of Nocton Hall in Lincolnshire. Mindful that the punitive rate of death duty could be the ruin of many an estate as it passed from one generation to the next, Lord Lothian was instrumental in establishing the Country Houses Scheme, which became enshrined in law in the National Trust Act of 1937 and allowed landowners to leave their estate to the nation in lieu of death duties. Lothian had remained single and without issue and he bequeathed Blickling to the National Trust. On his death in Washington D.C. in December 1940, while he was British Ambassador to the United States, Blickling became the first grand estate to be received by the Trust under the Scheme, and the precursor of many subsequently saved from possible ruin. Without his generous actions it is quite probable that we would not be able to visit this lovely house, park and gardens today.